The Hero's Journey on Star Wars

Joseph Campbell was a Professor of Literature, philosopher, and writer whose study of world mythologies influenced cultural producers from movies to literature.

The Star Wars films created and produced by George Lucas followed the structure of Campbell's monomyth. The following is a summary of the Hero's Journey in infographic format. The ideal way to know more about the monomyth is to read the work of Joseph Campbell in the books: The hero of thousand faces and The power of myth.

Posted by jjmarreiro at 2:21 PM No comments:

Click in the first image and press F11 to increase. At the end
of the reading, press the same key to return to the original size. 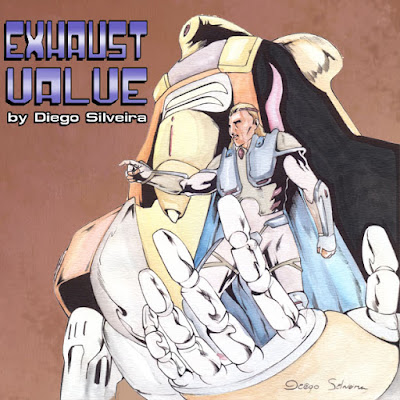 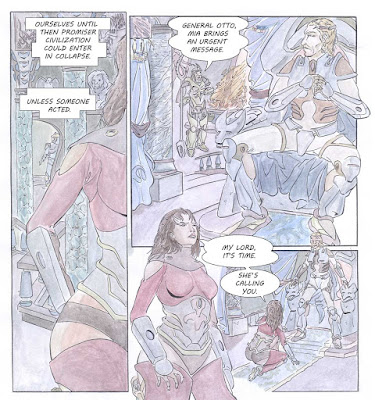 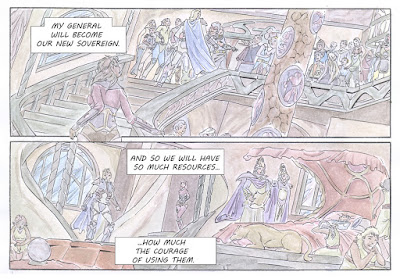 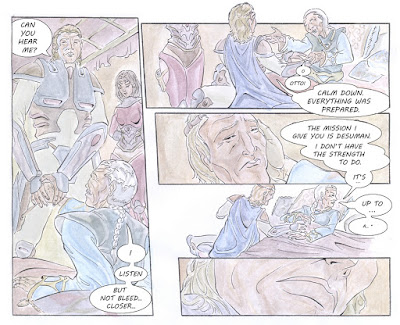 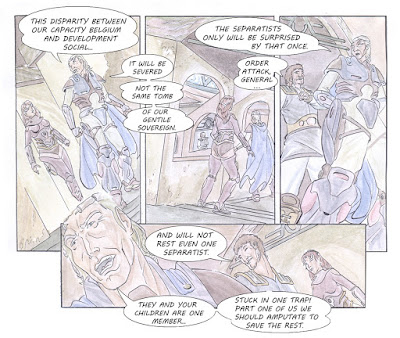 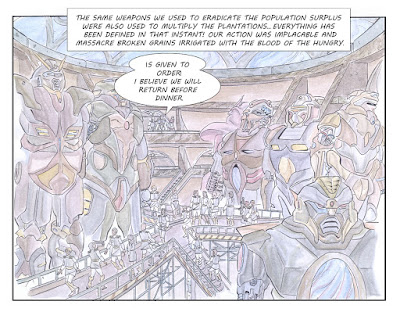 Posted by Diêgo Silveira Maia at 10:28 AM No comments:

Jean Okada is a brazilian artist, illustrator, comicbook creator and writer. To get some Prints, Original Arts, Sketch Cards, Commissions and others contact the artist by these means: 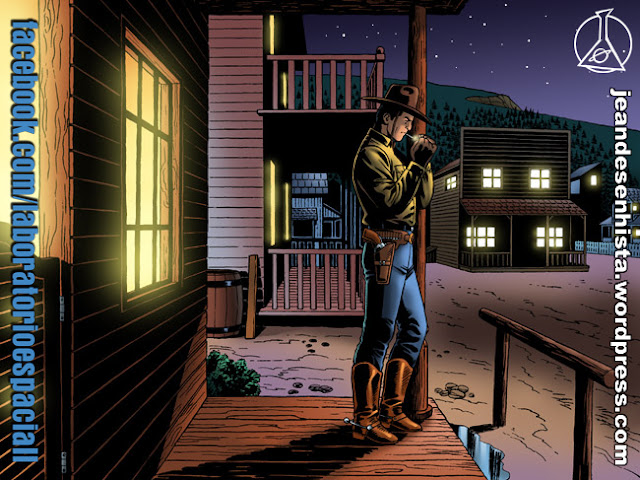 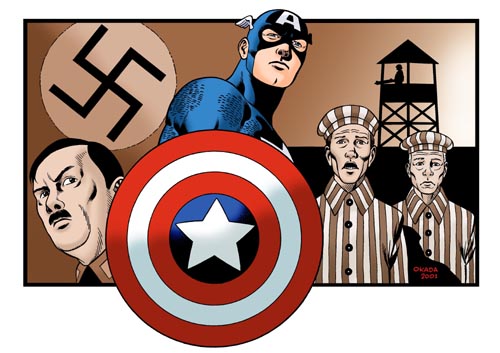 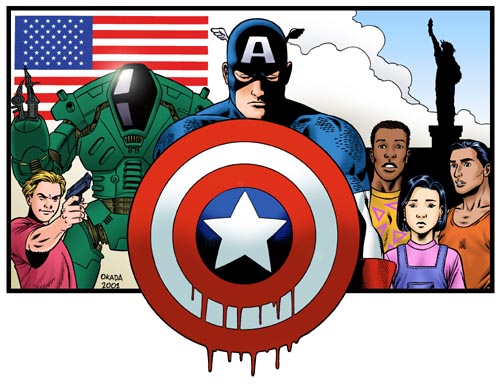 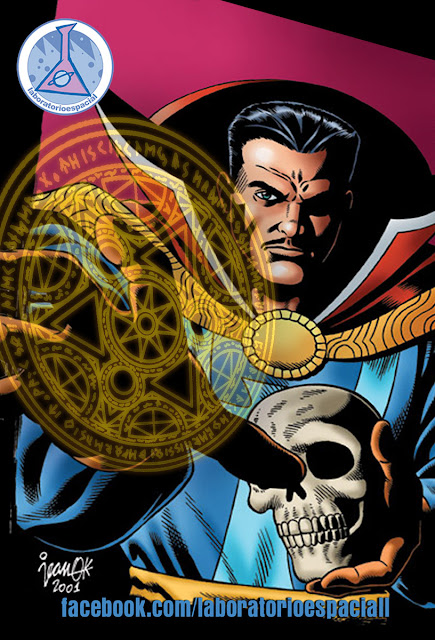 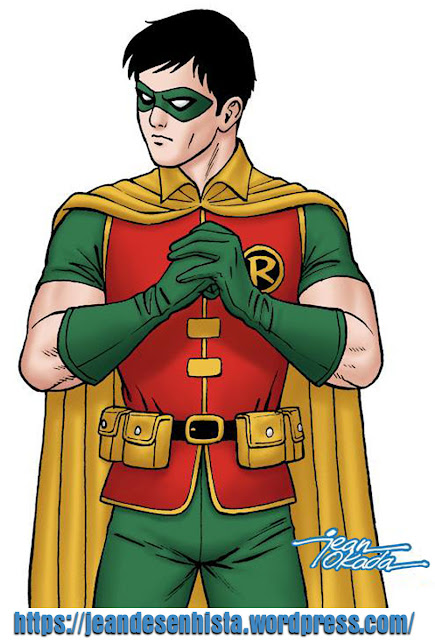 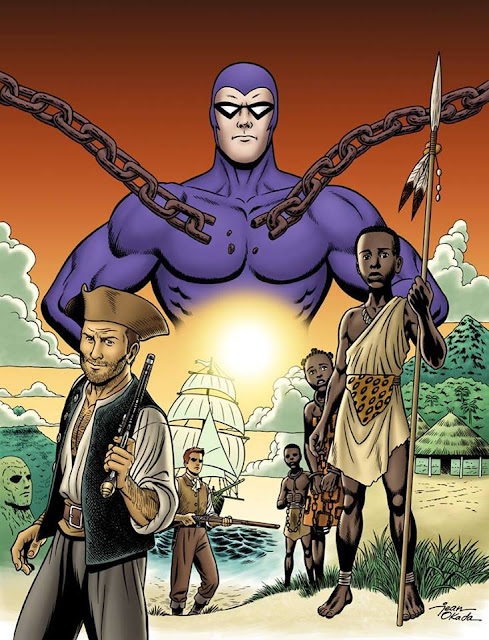 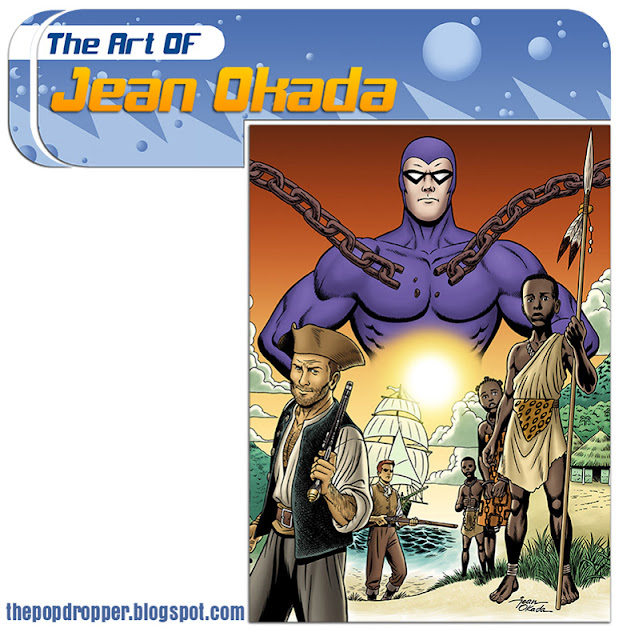 Posted by jjmarreiro at 4:25 PM No comments:

Email ThisBlogThis!Share to TwitterShare to FacebookShare to Pinterest
Labels: Art, Art Sale, The Art of, The Art of Jean Okada

Before the Black Panther

In the 1930s, like the radio waves, newspaper strips took to American homes the most varied fictional narratives. Funny situations with family and children, police investigations, westerns, science fiction and fantastic adventures were the most attractive contexts for readers. In this scenario came Mandrake (creation of Lee Falk and Phill Davis), an elegant magician capable of incredible feats (rarely explained). In the Mandrake comic strip (distributed by King Features Syndicate) readers around the world were introduced to his amazing partner, Lothar, who was described several times as "the strongest man in the world". This incredible character lifted elephants with one hand for pure fun. Side-by-side to Mandrake, Lothar faced challenges worthy of superheroes, before the term "superhero" even existed. In the 1954 telefilm, the excellent actor Woody Strode gave life to the character materializing his incredible size and elegance. In the 1940s came All-Negro Comics. A comic book produced and edited by African-American authors. One of the characters in this publication could be considered the forerunner of the Black Panther (1966). This hero, though he did not have a special costume, was called the Lion Man.


In 1965, Lobo debuted at Dell Comics and it was perhaps the first title of a comic book Black Hero.
Except for his Afro-descendent origin, Lobo had nothing different from most western guys. A fierce sniper, knight, and fighter, the hero was always willing to bring justice using his various abilities including an indomitable bravery.

Certainly, there is a myriad of black heroes that need to be discovered and listed, the newly acquired Marvel's Black Panther international fame is in a way an incentive for readers to start looking for and cherishing these other characters as well. 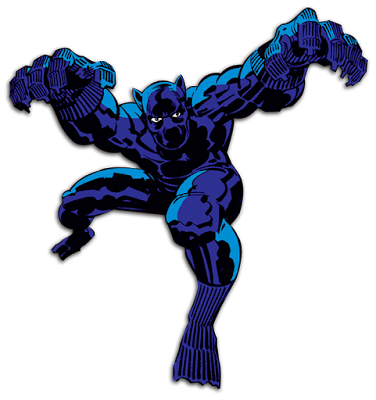 
Posted by jjmarreiro at 7:23 PM No comments: 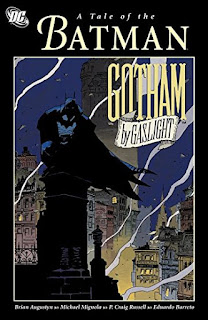 Gotham by Gaslight, a one-shot comic book by Brian Augustyn and Mike Mignola, which saw Batman in Victorian-era Gotham hunting Jack the Ripper, was such a striking success that inspired a full line of comics — the “Elseworlds” — which allowed DC’s heroes and villains to go on adventures in the most surprising scenarios.
Now, in a new DC Comics Animated Original Movies, the story comes to life in a unique way while also giving fans a new spin on the tale.

Sam Liu directs Batman: Gotham by Gaslight, a 78-minute movie written by Jim Krieg and adapted from the original Graphic Novel and its sequel Master of the Future, also written by Brian Augustyn.
While keeping the core elements and the dark tone of the original comics, the film takes interesting turns that will surprise people who already read the books, creating a completely new story.

Mike Mignola's incredible use of shadow is something hard to emulate in animated form, but the filmmakers succeed in replicating Mignola’s style to a degree, and they play well enough with steampunk aesthetic, resulting in a unique and interesting vision of a Victorian-era Gotham City.

Batman: Gotham by Gaslight is available now on Digital HD, Blu-ray/DVD, and 4K. 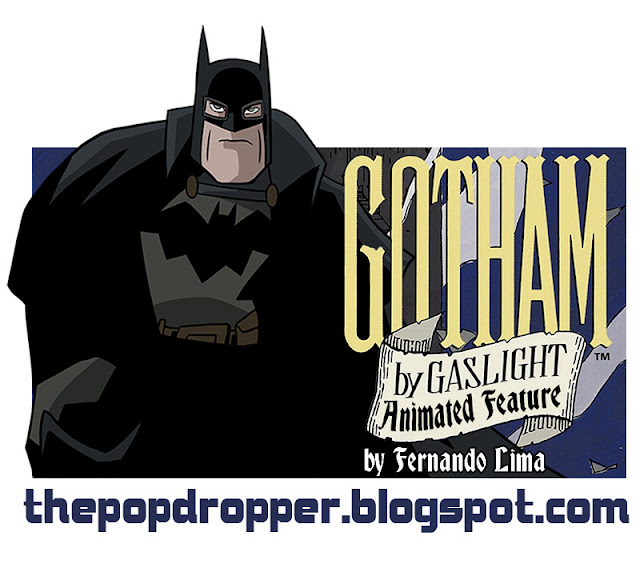 Posted by jjmarreiro at 3:42 PM No comments: 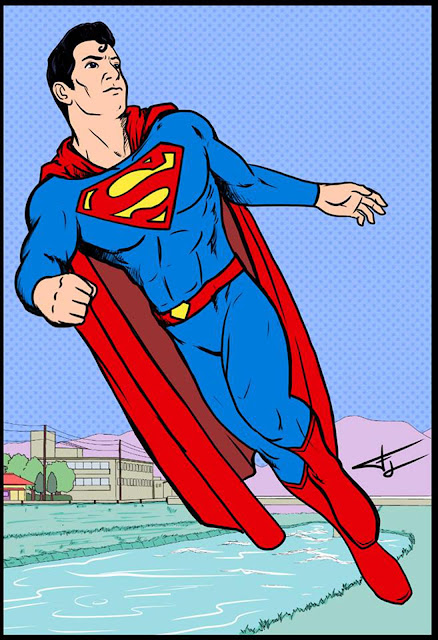 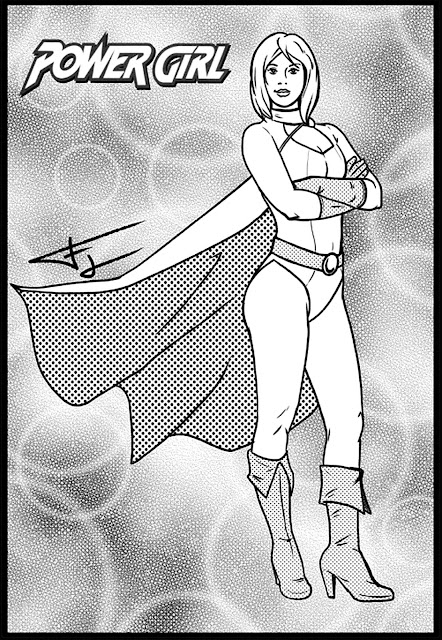 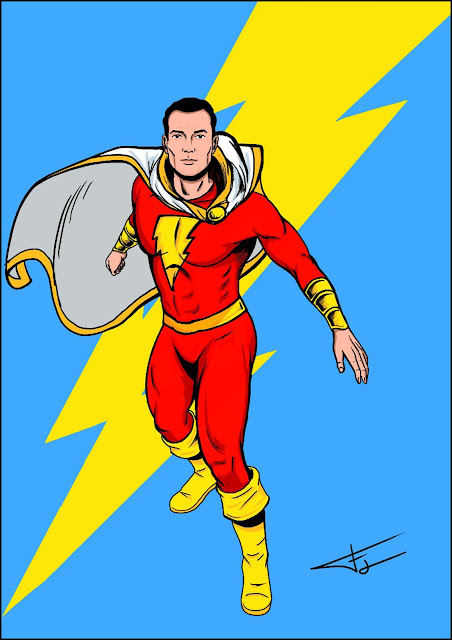 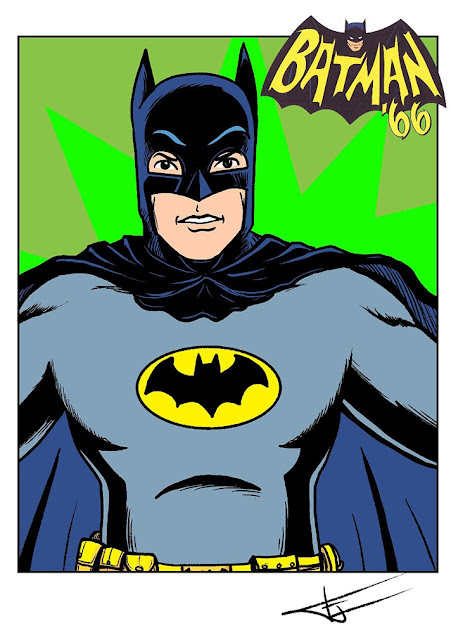 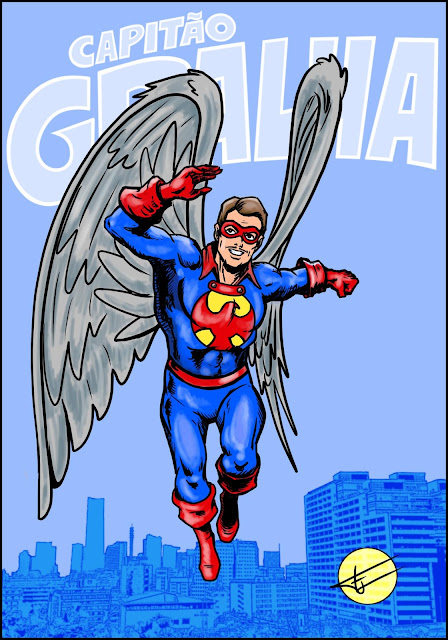 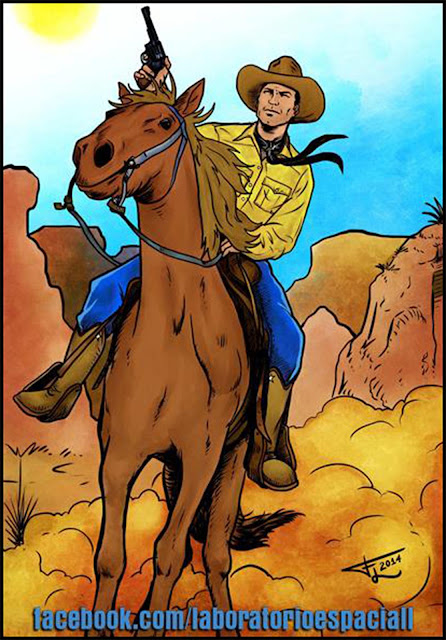 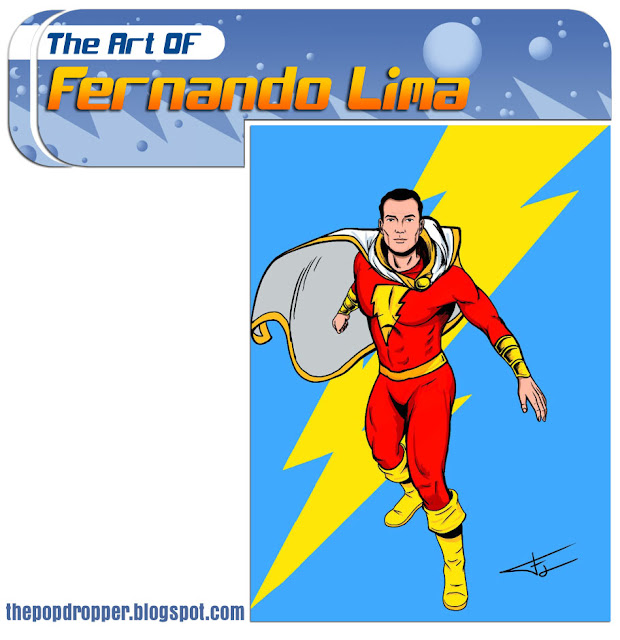 Posted by jjmarreiro at 3:27 PM No comments:

Lost and Found in Space!

Losing oneself in an unfamiliar neighborhood or strange city is certainly not one of the most pleasant sensations, getting lost in a distant jungle would be perhaps a little more dramatic. But, without a shadow of a doubt, getting lost in space must be one of the worst sensations imaginable. However, the series Lost in the Space of the 60s had nothing terrible, in fact, had a very large dose of fantasy and humor. There was a bit of sci-fi and adventure, but the triumphs and trifles of the trio Dr Smith, the kid Will Robinson and the Robot (called only Robot) centered the attention of the series (principally in the second and third seasons). If on one hand, the trio had great popularity, on the other it harmed the participation of the other characters, limiting them to mere assistants.

The original pilot episode (No Place to Hide) in which the characters Dr. Zachary Smith and the Robot did not appear was not broadcast until 1997. The characters having been inserted only in the edition that aired with the title: The Reluctant Stowaway. Jonathan Harris should only appear in this episode as a specially invited actor, however, the producers liked his participation so much  that they left him in the series.

Professor John Robinson was played by action star Guy Williams (the American name of the Argentinian actor Armando Joseph Catalano) best known for his roles in westerns, films, and as Zorro on the Disney TV series. 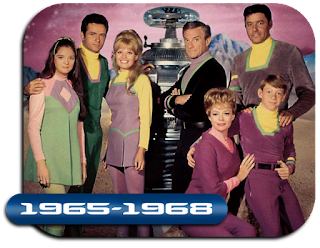 Before turning into a complete comedy, Lost in Space had a relatively balanced and fun first season with action and adventure. But its potential has never been fully realized. The series is said to have emerged after Fox rejected Gene Roddenberry's proposal to make a space series with a low cost of production. Executives would have turned down Star Trek and picked up Gene's ideas on how to create scenarios and space plots using only a few dollars, but a lot of cardboard, papier mâché, different lightings in a few studios and scraps  from other scenarios. However, history has shown that Star Trek has become a more solid franchise (generating several derived series) not by the low production cost, but by the high quality of their scripts. The original series of Lost in Space aired between 1965 and 1968. 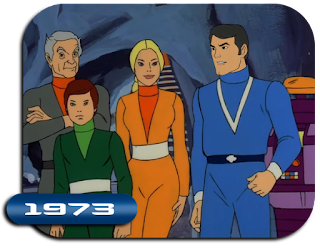 In 1973, Hanna-Barbera rehearsed a return of Lost in Space as a cartoon, with character designed by Alex Toth (responsible for the designing of several Hanna-Barbera hits such as Herculoids, Space-Ghost, and Galaxy Trio). The animation chronicles the adventures of the brothers Craig and Link Robinson, accompanied by the geologist Dina Carmichael, Dr. Smith and the Robot. A meteor shower takes the spacecraft Jupiter 2 out of its destiny leading it to an unmapped region of space, this would be the beginning of several adventures that never happened because the series was not approved. 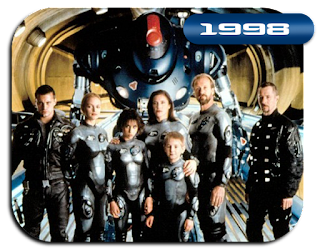 In 1998, the Robinson Family won their first film adaptation. The highlight is the excellent Gary Oldman as Dr. Smith. The plot has a great beginning with a series of well-sewn ideas to a point where the movie begins flirting with terror almost turning into a horror film. The plot tried to be innovative, more solid and sober, at the same time that drank in various sources of cinematographic science fiction with references from Alien, Star Trek and even Back to the Future. By the end, the ones who were in fact lost were the producers whose film failed to be charismatic enough to get a sequel. 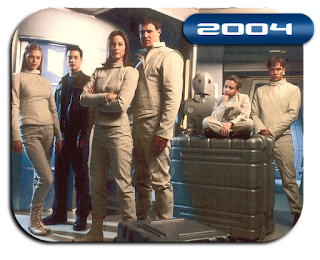 2004 was the year that marked a new attempt of return to the series, this time titled The Robinsons: Lost in Space. The special effects were quite bold for a TV series at the time and the ships and uniforms designs were suited. The pilot episode, although not picked for broadcasting, showed a good level of drama and action. Brad Johnson retained Prof. John Robson's role as the action hero of the series - keeping the mood Guy Williams brought to the character in the original series. Adrianne Palicki played Judy Robinson and would return to sci-fi productions in Marvel's Agents of SHIELD and The Orville, 2017 (A series created by Seth McFarlane that pays homage to Star Trek); Jayne Brooke, Maureen Robinson, won a starring role in Star Trek Discovery, 2017, as Admiral Katrina Cornwell.

2018, April 13. Netflix brings back to Lost in Space new interpretations for old characters, radical changes, more sober themes and dazzling special effects. Following a line of adventure and suspense (elements that were the milestones of the first season of the original series), it is possible to see in the trailer scenes that refer precisely to episodes of 1965.

Different from Star Trek (which had 5 series in more than 500 hours of broadcasting tied in a single timeline), the new series of "Lost" does not have a canon to respect, which means immense creative freedom and very little complaining from the fans (almost inexistent nowadays). Producers are likely to refer to elements of some episodes of the original series by recycling their concepts into something more believable and palatable to the new audience. A certain disappointment for connoisseurs of the original series is the new version of the Robot - which, except perhaps for the voice, has no design elements similar to the original, not even by far. And even this qualifies this new production as a product for a new audience. See the teaser and the Trailer below. On April 13th (2018) you can check out the series on Netflix.

Main changes:
- It will not be a comedy series.
-The robot design is humanoid.
-Dr. Smith is a Woman.
-Don West is a contractor and not a highly trained military man.
-Bill Mumy, Will Robinson of the original series, makes a special appearance in the first episode.
-The Robinson Family is sent on a mission of colonization because the Earth is increasingly unbearable. Wow, it does not even sound like fiction! 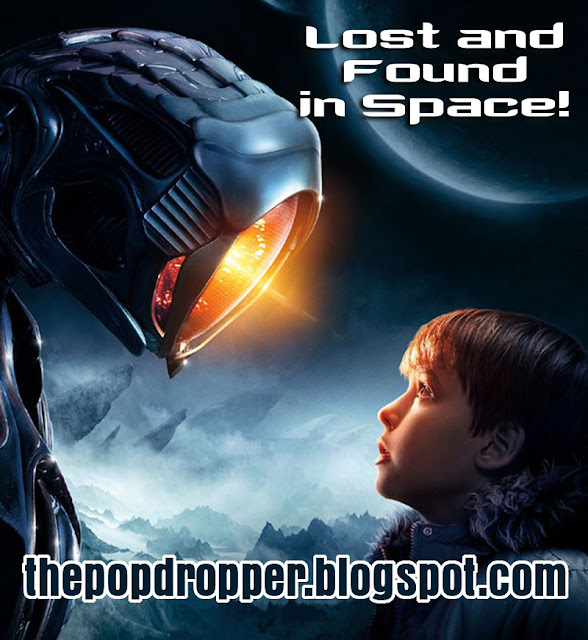 Posted by jjmarreiro at 7:31 AM No comments: 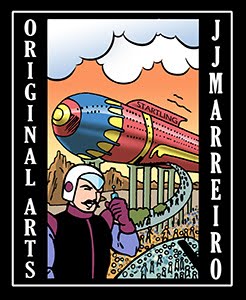